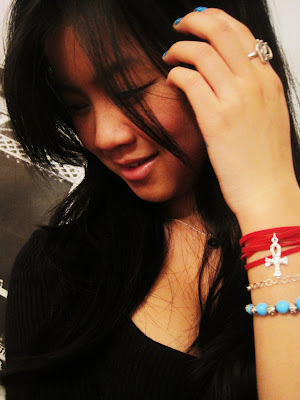 I’ve always been an extremely superstitious person. Anything from knocking on wood (an annoying habit, I know) to attempting to not letting black cats cross my path – it’s silly I know, but I’ve always been a clumsy person and ANYTHING that can help me not slip, fall and trip – I’m up for! Maybe I should just watch where I walk, or maybe my UGG boots just need some traction! Nevertheless, I’ve always been obsessed with small charms! And these ones provide so called “protection”!

I am extremely excited to say I have collected four of the main charms – they come from all over the world, different religions and all have different meanings. On the contrary, I’m not exactly the most educated in any of these cultures (and not exactly an amulet expert!), but through friends and a ton of research, I think I can attempt to write the basis of each! If you have any more info for me on any of these lil’ treasures, contact me at my blog e-mail at rachspeed@live.com
Some of these charms relate to protection against the evil eye – There is quite a lengthy explanation behind this belief so I don’t think I’ll elaborate too much –
IN RACHSPEED SUMMARY…
“The Evil Eye” is the “curse” or “sickness” passed on to other people (sometimes without intention) by people who are usually envious or jealous. I’ve read in some places that the evil eye can even cause headaches and pain towards people. Sometimes it is called the invidious or envious eye. The evil eye is used in a wide range of cultures & countries – from Italy, to India. This “curse” is one of the most universal beliefs throughout cultures and has a lengthy history behind it. Too read more in depth, check out a great website I found here!
NOW, Lemme go through the good stuff now! (Brief Descriptions) 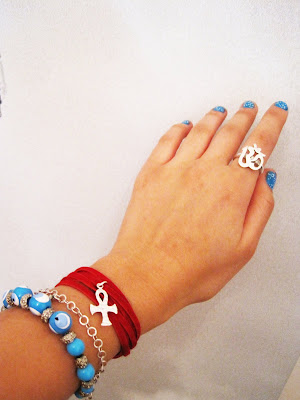 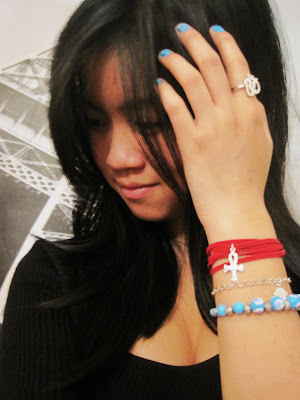 The Treasures of Kensington!
Hamsa – A palm shaped hand (with thumbs on both sides, making it symmetrical) that is also known as the “hamseh” in Hebrew and “the hand of Fatima” in Islamic culture. It is an old and popular amulet, bringing protection of the “evil eye” to it’s wearers. 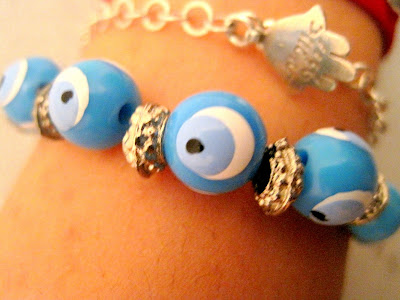 My Hamsa (upper) & Evil Eye Bracelet (lower)
Evil Eye (the charm)– Clearly, It is meant to protect against the evil eye. I have seen the evil eye in so many different shapes and styles – and has actually become quite the trend to wear it. The evil is usually blue (light or dark) and resembles an eye (obvi!) – however as seen on my bestie, Nicole’s neck, I’ve seen different versions of the evil eye. She wears one that is actually a blue cube, but also is known as the “evil eye” amulet.
Ankh– means “eternal life” or “the key of life”, based in Egypt and is seen on hieroglyphics being held by Egyptian gods. The ankh looks like a cross, instead with a loop at the top. I tie mine to my wrist with a RED CORD – Also protection from danger 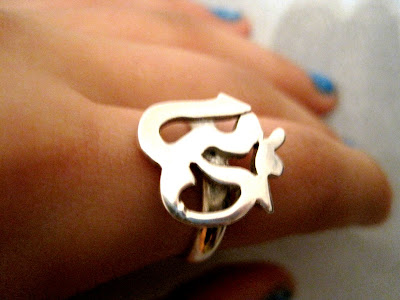 The Ohm Ring
Ohm – a Hindu symbol meaning “peace”. It is used in meditation. Good karma? 🙂
Anyway loves, those are a few symbols I have now jingling on my arm! I believe in good and bad energy, karma – these charms symbolize that – and on the plus side, aren’t they super cool?
WANT IT?

Courage My Love
– I got my ankh, red cord, evil eye bracelet and my ohm ring at Kensington Market (Toronto) in a vintage shop called “Courage My Love” – Prices of things weren’t expensive – my most expensive buy was my ring – which was 12$, but nonetheless in reach. Most of the jewelry at Courage was under 20$, but my range was around 1$ – 12$! (whatta steal!??!)
Overall, I think they were some good purchases! I’ve always loved this stuff since I was really small – you can never go wrong with some good karma in your life! 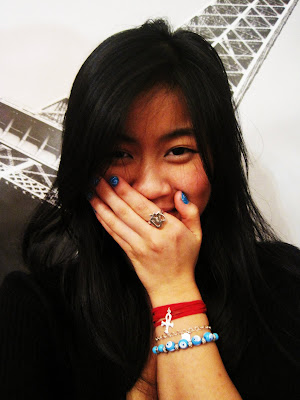